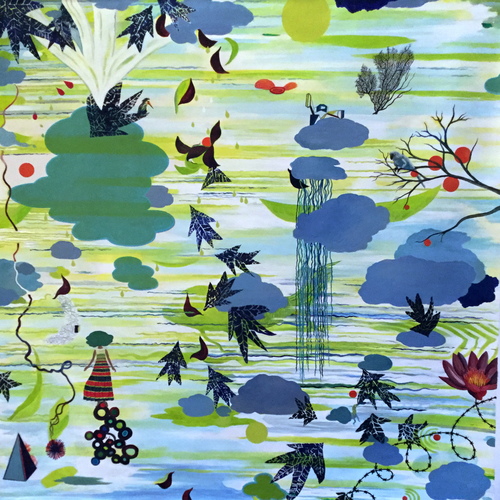 I am intrigued by the vastness of nature, and complex worlds that exist within each other.  My paintings, drawings, text collages and accordion books depict otherworldly environments, often inhabited by a lone figure lost in a chaotic world.

Organic and geometric shapes float in skies or are deeply immersed in foliage, in a kind of macro/micro cosmos.  By combining disparate "puzzle piece" images from sketchbooks, travel photos and found sources, I try to reaffirm ideas from Western physics and Eastern philosophy that all phenomena are interdependent.

Fritjof Capra's writings on chaos theory are especially fascinating to me.  He explains that due to advanced computer technology, movement in nature previously thought to be random or "chaotic," such as clouds and fire, are actually measurable, with almost identical mathematical patterns.  The idea of order in nature is comforting, in our overwhelming digital age.  Yet it's pretty clear that the natural world is an infinitely unsolvable mystery.

My orange tree series was triggered by a trip to Rome in 2006, where I became ill and then quickly healed while painting under a 900-year-old orange tree still bearing fruit.  I include it in most of my work, as a symbol of rejuvenation and hope.

My next project is an installation of a 'magical' tropical forest with images of extinct/endangered animals, multicolored figures, and spirit ancestors, using puppets, paintings, moving shadows, prisms of light, and sound.  This upcoming piece is informed by recent travels to the South Pacific, where spectacular beauty is juxtaposed with a sad history of genocide.  The idea of transcendence from a dark realm has always been a part of my work.
Loading...